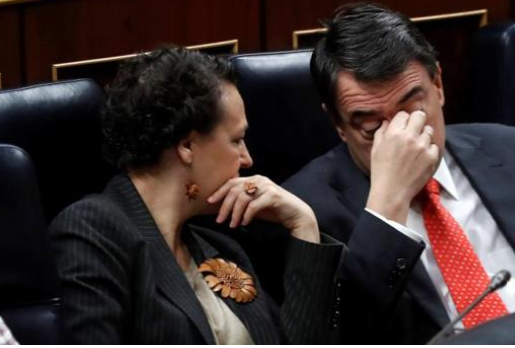 The Ministry of Labor maintains its intention to modify by Royal Decree some aspects of the labor reform approved by the PP in 2012, just as it announced a few days ago this newspaper. This was reiterated today by Minister Magdalena Valerio during the face-to-face meeting she had with En Marea's spokesperson, Yolanda Díaz, during the control session of the Congress.

"The labor reform, do not worry, that there is still the figure of the decree law and we will bring it, and I hope that you validate it," said Valerio, even though the president of the Government, Pedro Sánchez, had postponed this promise for the next legislature, admitting that "things have remained in the pipeline" as the repeal of the most damaging aspects of the labor reform of the PP, and hoped to resume it after the elections on April 28.

Yes, the minister acknowledged that she still does not know when the decree will be approved. "I can not say because I still do not know," settled the Minister of Labor, while government sources dismiss this Friday, probably because of the special interest in trying to achieve consensus in this area, so they continue to maintain contacts with the social agents (CEOE opposes frontally while the unions demand that it take it forward) and with the parliamentary groups to try to obtain support for their validation. "We will try to move things forward with agreement, with dialogue, because we want them to end up in the Official State Gazette," he added.

What Valerio did emphasize is that in Congress it is that "this Government is not in office, it will be in office as of April 28, until then it will be functioning", so it has "still possibility of legislating". Therefore, the Permanent Council can continue to approve regulations after the Cortes dissolves on March 5.

"We want facts and not words," answered the deputy from En Marea, while from the PP Carolina Spain asked him not to modify the labor reform because, if they do, Spain "can return to the six million unemployed." In turn, the PNV deputy Íñigo Barandiaran reminded the PSOE that they need the approval of their group to take forward the Royal Decree and warned that "we will not give any support if we do not agree on the full content of these initiatives" .

The measures that the Government intends to approve and that they had already agreed with the unions is to return the prevalence of the sectoral agreement over the company, to recover the ultra-activity of the agreements (that is, to extend them automatically until a new one is approved) , implement a daily record of working hours in companies and limit subcontracting are those measures already agreed.
- March 04, 2019