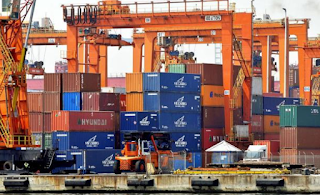 The global slowdown means that foreign sales only rise by 3% in 2018, compared to the record increase of 5.6% in imports

The data blows the alarms. Spain, which based part of its economic recovery on exports, has now to face a new time threatened by a trade deficit that reached 33,840 million euros, representing a rise of 36.8% at the end of 2018, according to the data of the balance of foreign trade presented this Thursday by Minister Reyes Maroto.

This deficit was motivated by the moderation of exports , which despite continuing to grow (+ 2.9%, 285,000 million euros), do so with much less force than hitherto, with the added problem that could be exacerbated in the next few months due to the trade war between the United States and China, the uncertainty surrounding the 'brexit' and the slowdown -even recession- of strong eurozone economies such as Germany and Italy.

Thus, the tail winds that have accompanied the economic growth of Spain over the past few years now seem to face. Therefore, Maroto detailed the impact that this new situation can have in such important sectors as the automobile, which reduced its exports by 1.5% in 2018.

The data reveals that, for the first time since 2006 , Spanish exports grew below the eurozone average, and that they have not been buoyant at a general level either: 2.9% of Spanish exports versus 4.4% of progress of the euro zone. "We need new measures to boost the international competitiveness of our companies", insist from the Club de Exportadores.

They also point out that Spain has lost its share of international trade compared to the three most important countries in the eurozone: France, whose data reveal a rise of 3.8%; Germany, 3%; and Italy, 3%. In total exports, three out of five were destined to the EU, half to the euro zone and 34% to non-EU destinations.