«If the boxes hid something in Bankia, the first one deceived was me»

«If the boxes hid something in Bankia, the first one deceived was me» 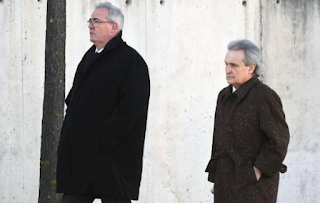 Verdú, former CEO, follows the defensive line of "it was not my responsibility", although he claims that the bank's accounts "have been the most blessed in Spain"

The defense manual being followed by those who were the main collaborators of Rodrigo Rato in the Bankia dome begins to be clear and introduces nuances regarding the position of his former boss, who denies any type of irregularities and glimpses a kind of political plot in his forced exit as in the subsequent criminal process. Unlike him, both José Manuel Fernández Norniella , who was executive director, and Francisco Verdú , who was named 'number two' of the entity, are not so clear in denying that there could be "problems" and bad performances, but they coincide in that they were not "under their responsibility".

This line of argument has led in recent days to the visible anger of the chief anti-corruption prosecutor, Alejandro Luzón , who asked them how it was possible to evade those responsibilities from positions as important as those they occupied. Both answered that they were focused "on other tasks", and even Verdú excused himself on Wednesday when he agreed to the post of CEO in June 2011, preparations for the IPO were completed a month later - which is what is judged in the Audiencia Nacional , together with the possible falsification of the annual accounts- and «the pamphlet was almost written up», all this -he added- «with the advice of the best independent banks and advisers in the world».

"I sign it because I have all the blessings," he said, then asked aloud: "How can I not believe the Bank of Spain , the FROB and the European Banking Authority (EBA)??, What happens, perhaps everyone knows that there is something hidden and does not say it ». "When you arrive at a site," he continued with his explanation, "he relies on the audit, he does not commission 2 million appraisals and 1.5 million borrowers are reviewed"; "All the accounts," he insisted, were revised "at fair value." "I read the risks and analyzed them, but I understood that everything was well done", he added in the same idea, although he acknowledged that he did not personally review those account books that, according to him, were "the most supervised in the history of Spain".

Verdú drew an almost idyllic Bankia before entering the entity. «I joined to improve the business ... because there was potential for growth», and because I saw it as «the biggest challenge of the Spanish banking ». And once inside, he said, the difficulties he observed were not serious, according to him. For example, and in response to the prosecutor's questions about the price of shares - one of the keys, according to the Public Ministry, of the subsequent stock market fiasco - that the directors "were not satisfied with the value that was finally set (3). , 75 euros), but the economic circumstances »sent and Spain then suffered a crisis, while in Europe the fear of repeating the Greek rescue was heavy .

However, he said it was a decision "of the president, after meeting with the insurance banks and Lazard ", but then criticized that "what does not make sense is that the Bank of Spain, if he had the slightest doubt about the price , do not show it before «. In any case, he pointed out that the low value placed on the securities, although the discount applied was lower than the stock market premieres of other European banks, is not related to the viability of the entity.

Luzón understood that the late incorporation of this senior manager to the bank may not know "in the first person" some issues, such as the need to raise provisions (for the bankruptcy of Martinsa Fadesa , for example) and contemplate some deteriorations that were not mentioned then (some ruinous businesses of Banco de Valencia and Bancaja ), but he would know something "a posteriori". According to Verdú, these problems would be known later, although in any case, he added, "in the triptych leaflet all the potential risks were very well reflected", to which the prosecutor replied saying that they did not materialize and that they were only talked about "in general terms".

«How could I know (then) about Banco de Valencia? I can not cheat any investor if I do not know, your honor, "the former CEO declared, addressing the court directly. If the savings banks that made up Bankia at the end of 2010 concealed something, the first one deceived was me, "he emphasized to argue his ignorance of possible irregularities.

Neither in the refinancing of credits that, according to a report of the Bank of Spain of 2011 that the fiscal one read, badly were counted in terms of late payment because only accounting adjustments were made to hide the increase of risks. Verdú said he had not known about these conclusions and even did not believe them because "if it had been true, I would have been very worried", given that "it does not seem reasonable for a loan to go live without paying anything".

"Those responsible for that area could know it. I do not; It was not my responsibility, "he said in an attempt to avoid further discussion. Luzón also asked him if he knew of some problems that the auditors raised about the 2010 or 2011 annual accounts, to which the defendant replied that only with respect to the bank's parent, BFA , although he later admitted that between March and April 2012 Yes, he was worried because Bankia's documentation was missing because he sent the auditor and he did not deliver his report.
- March 04, 2019