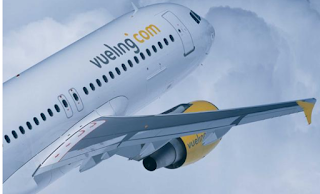 Brussels will give a margin of six months to Iberia, Vueling and other companies integrated in the IAG group, to restructure their shareholding and update the permits to continue carrying intra-European flights in the event of a 'brexit' without agreement. This is established by the new regulation drafted by the European Union (EU) to avoid a sudden interruption of air connections in this hypothetical scenario. The document would still have to be validated by the European Parliament and the Council but gives a respite to the Spanish airlines to show that more than 50% of their shares are in the hands of community companies and not third countries, a situation in which they would find themselves the United Kingdom with a brave divorce on March 29.

"If, as a result of 'brexit', an air carrier that holds an operating license issued by a member state of the EU fails to comply with the community ownership and control requirements, it will have 6 months after the date of application of the Regulation to meet all these requirements », reflects the document that has achieved a first agreement between the European Parliament and the Romanian temporary presidency. It still needs the final approval of the European Parliament and the Council itself.

Iberia and Vueling are part of the Anglo-Spanish group IAG (International Airlines Group), which is also the parent of British Airways, Avios or Ireland's Air Lingus, which has a capital majority that would no longer be a community after a 'no deal'. Airlines in such a situation would have to submit "within two weeks" to the entry into force of the regulation "a precise and complete plan with the measures aimed at achieving full compliance with the ownership and control requirements" that should make cash in that half year margin.

Last 11th IAG tried a first shield by limiting to 47.5% the purchase of shares of the group to non-EU companies, in an attempt to circumvent the European restrictions that in principle would not correct the situation before a chaotic exit, since the restriction did not Excluded potential British investors.

What is involved is that these companies do not lose the operational license between airports in the community block. But the agreement reached includes a provision that reveals the hardening of the positions of Brussels in relation to a 'brexit' without agreement. In the proposal launched in December by the European Commission, as part of the contingency plans, it was proposed to avoid the total interruption of air traffic between the EU and the United Kingdom with a regulation guaranteeing for twelve months the provision of certain air services between the two sides of the Channel of La Mancha. It also considered extending the validity for nine months of certain aviation security licenses.

Now that option is cut to 7 months. This special provision "guarantees the right to continue to provide scheduled flights under public service obligations after the date of application of the 5eglamento, in order to ensure the continuity of public services while the national authorities make the necessary adaptations to the new situation », Says in the document.

All these contingency measures, such as the ones up to 19 raised to date by the European Commission (and which are mostly in process), are subject to reciprocity. That is, for the United Kingdom to have the same deference with the community part and maintain open channels that allow a certain transition that mitigates the possible impact of a chaotic rupture.
- March 04, 2019