Iberdrola wins more than 3,000 million for the first time in its history

Iberdrola wins more than 3,000 million for the first time in its history 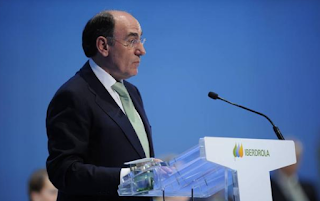 The company, which improves in all its business areas, will propose the re-election of Galán as president at the meeting on March 29.

The annual profit of Iberdrola in 2018 was 3,014 million euros, which represents an increase of 7.5% with respect to the results of the previous year. For the first time in its history, the company chaired by Ignacio Galán has managed to record profits that exceed the barrier of 3,000 million euros.

The corporation has made investments worth close to the 20,000 million made in the last four years, the international expansion, the normalization of operating conditions in Spain and the good progress of all businesses, as the company itself points out. In addition, the improvement was achieved despite the currency effect and the lower impact of extraordinary items.

The Networks business generated an operating result of 4,915 million, 16.2% more; that of Renovables, of 2,444.7 million, 39.3% more, driven by higher production and greater installed capacity; and that of Generation, of 2,038.4 million, 39.3% more, due to the normalization of conditions in the UK retail market, the greater capacity available in Mexico and the greater demand in Spain. Likewise, the company carried out divestments worth 1,112.9 million euros, compared to 309.2 million posted in 2017.

The president, Ignacio Galán, has indicated that »these results show the success of a sustainable model and encourage us to continue working for the transition towards a low carbon economy. The fight against climate change is an opportunity ». For this year, the firm estimates that the greater weight of regulated network assets, the new installed capacity and improvements in efficiency allow us to expect that the increase in profit and EBITDA will be "in the middle part of the first decade".

These annual accounts will be voted on March 29 at the shareholders meeting that will take place in Bilbao. It will be the moment in which the shareholders will vote for Galán's re-election as executive director, with which the director, who will turn 69 next September, will head the energy company until 2023. In this way, the president will lead the development of the strategic plan foreseen until 2022.

Last year, the president of Iberdrola already showed the big institutional investors his commitment to renew the position for a new mandate, which would fully pilot the new strategic plan 2018-2022 of the group.

The shareholders will also vote for the appointment of Sara de la Rica, professor of Economics at the University of the Basque Country and current director of the ISEAK Foundation, as a new independent counselor. With its incorporation to the board of directors, Iberdrola will become the leading Ibex 35 company by percentage of women in its governing body, with 42.8% of female directors out of a total of 14 members.

The energy group will practically double the average percentage of women in the boards of directors of the selective Spanish -22% according to the PwC Women to Watch study-, far exceeding the recommendation of the Code of Good Governance of the CNMV for 2020 (30% ) and that of the European Commission (40% for the same year).

In addition, Iberdrola strengthens its presence as independent in its governing body with the re-qualification of Xabier Sagredo from 'other external' to 'independent', agreed on Tuesday by the board of directors, counting 10 of the 14 members (71.4%) with this category. The renewal of this body will include the departure of Ángel Acebes, who was a counselor of the power company since 2012, and whose term expired this year.

Other proposals to the board will be the application of the result and distribution of the dividend for the year 2018, whose complementary payment will be carried out within the framework of the optional dividend system 'Iberdrola Flexible Remuneration', as well as the approval of two increases of capital related to this program.
- March 04, 2019