Chips to purify the air

Chips to purify the air 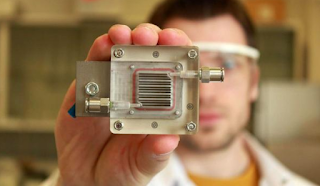 Belgian researchers create a device that transforms pollution into hydrogen

Nearly 38,000 people die prematurely a year worldwide due to high diesel emissions. In Spain, according to data from Ecologists in Action, poor air quality is responsible for almost 25,000 premature deaths.

The increase in the use of fossil fuels has worsened the air that is breathed in the big cities. Therefore, a group of researchers from the University of Leuven (Belgium) has launched a device that purifies the air and, at the same time, generates energy.

"In the past, nanomaterials were mainly used to extract hydrogen from water, and now we have discovered that this is also possible, and even more efficient, with contaminated air," explains Professor Sammy Verbruggen, who leads the project.

With the size of a chip, the device has two small cameras separated by a membrane of nanomaterials that breaks the particles in suspension that generate pollution. The air is purified on one side, while on the other hydrogen gas is produced that can be condensed and stored for use.

«The greater the contamination and the higher the concentration of harmful particles, the better performance of the device»

In this way, the higher the contamination and the higher the concentration of harmful particles, the Belgian device improves its performance. The first prototypes born from the laboratories of the University of Leuven are small, but the Verbruggen team is working on larger projects to apply this technology to the industry.

"We have to scale the size at which this technology is useful, we are also working on improving our materials so that we can use sunlight to trigger reactions more efficiently," says Professor Verbruggen.

The secret of the system is in the sunlight that starts the device. The difference with solar panels is that the energy absorbed from the Sun serves to clean the air and is then stored in the form of hydrogen.
- November 02, 2018