Sony turns the tables into smart with a projector

Sony turns the tables into smart with a projector 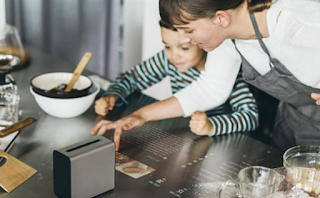 It is a new intelligent projector that converts any flat surface into a screen, and that can already be purchased in Spain and in six other European countries for a price of around 1,499 euros.

The device, which was presented by Sony during the MWC 2017 in Barcelona, ​​can convert any flat surface into a 23-inch high-definition screen that can be controlled in a tactile way.

It can be used on surfaces as diverse as the floor of a living room, a kitchen countertop or any wall. It allows to carry out different activities such as playing, project recipes or making Skype video calls, among others.

It allows to project images on surfaces of up to 80 inches. In addition, it has other features such as bidirectional stereo speakers and presence sensor, which activates the device when someone approaches.

You can also connect to the Internet through the WiFi network, from where you can download applications through Google Play. The device is already available in Sony's online store in Spain and in six other European countries.
- October 22, 2018