Amazon looks for delivery men at 14 euros per hour

Amazon looks for delivery men at 14 euros per hour 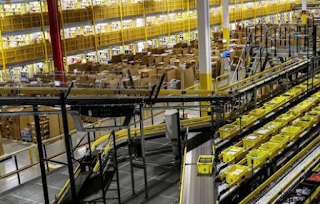 With the BlackFriday already gone and Jeff Bezos become the richest man in the world, Amazon gives the bell this week with the announcement of the arrival in Spain of its Flex program . It is a distribution system based on freelancers with their own vehicles that pick up the packages at the logistics centers and deliver them to homes at 14 euros per hour . A way to "significantly cut delivery times," explains the company.

The requirements: be over 18 years of age, have a driving license in force, have your own medium-sized car and a smartphone. Interested self-employed workers must register with the Amazon Flex app and manage shipments based on their time availability and where they can deliver. "Participants will be evaluated and will begin to deliver packages as independent delivery partners using Amazon technology," sources say.

Up to now, the fastest deliveries take between one and two days after the purchase of the products online by the user with the Amazon Prime service, but with Flex they will be able to "cut the periods of considerable form".

The program, which is already operating in the United Kingdom and the United States , is in the "activation phase" in Madrid awaiting workers

The company announces "up to 28 euros for each block of two hours", but these new occasional delivery drivers have to pay out of pocket for travel and other expenses derived.

Amazon Flex arrives in Spain at a delicate moment in terms of the employment situation of hundreds of new packagers and food delivery companies such as Deliveroo or Glovo, whose employment contracts are unclear. The workers of Deliveroo protested last summer because of their precarious working conditions and demanded a minimum of 20 hours per week of work.

About his future in Spain, Amazon ensures that our country has "a great entrepreneur spirit", so they believe that "many" will be interested in obtaining "additional income" . In addition, they explain that for those who want a more regular schedule, they have "thousands of vacancies" to work in their logistics centers, research and development centers and corporate offices throughout Spain.
- October 11, 2018