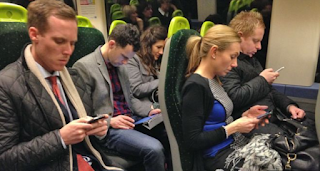 In the bus, in the subway, even in the car: in the trip between the house and the office, many take the opportunity to read and send pending emails related to the work.

And, for a group of researchers, that time should be considered part of the work schedule.

According to an investigation the University of the West of England, on account of the internet access in trains and subway stations, as well as for the popularization of cell phone use, the daily work hours have been extended considerably.


The study analyzed 5,000 users of trains and passengers of the London underground, where you can access the internet at the stations despite the fact that the system is underground.

" I am a busy mom and I have that time to get up to date on the job, " reads one of the testimonies of the investigation


It's important for me and my mental health to have all the work ready when I'm on the train," said a frequent traveler on the route that leads from the center of the country to London.

High percentage
The study indicated that 54% of people who go to work and who were part of the research used the wifi system to send emails related to labor issues.


The rest used their own mobile connection to send these mails .

And it was not only in the morning, when messages were sent for the day that begins, but also at the end of the day - on the way home or somewhere else - to complete pending tasks


Somehow it's a dead time that allows me to finish what I have pending in the afternoon," explained one of the participants, who usually travels between the city of Birmingham - center of the country - to London.

The study focused on examining the impact that the installation of the wireless internet system has had on two train routes to the capital of the country.

And it showed that the access to Internet has had effective consequences in the extension of the labor schedule, by means of the use of laptops, tablets and cellular.


For working mothers and fathers, this moment is also seen as a "transition", where they change their roles: from the role they occupy in a family to which they have to work.

And there are others who feel that it is a "neutral" space in which they can work without distractions while moving to their jobs.