Technological unemployment will be the great issue of the 21st century

Technological unemployment will be the great issue of the 21st century 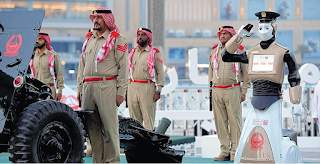 Almost half of current jobs are at risk of disappearing by robotics.

The real threat of artificial intelligence is not that robots dominate humanity, as they predict several films, but that they leave her unemployed. That is one of the conclusions of journalist Andrés Oppenheimer, who since 2013 has interviewed actors and analysts of the phenomenon in countries such as the United States, the United Kingdom, Japan and Israel, and whose findings he gathered in the book ' Sálvese quien puede. The future of work in the age of automation . '

Oppenheimer, author of several books on the future and winner of prizes such as the Pulitzer and the King of Spain, warns that the replacement of workers by robots will not stop in trades like the one of the waiters.

And the phenomenon is spreading to less obvious fields : medical robots, able to diagnose more accurately, and judges scheduled, without prejudice, whose decisions do not vary depending on their mood or hunger they feel, as it does with humans according to a study by Shai Danziger, from Ben-Gurion University in Israel.

The jobs that will survive are those "difficult to explain", whose functions can not be programmed.And technology will also generate employment, although Oppenheimer says we will work less. The question is whether that scenario will be of scarcity, with a class displaced from their trades and unable to adapt, or if the increasing automation will generate necessary resources for people to enjoy more free time. A future in which work is not the center of personal development.

What led you to investigate this phenomenon?

I started in 2013, when an Oxford study came out according to which 47 percent of our jobs run the risk of disappearing, by robots and automation.There are two factors that accelerate this phenomenon: robots are becoming cheaper and smarter. According to a study by the consultancy Bain & Company, while buying a robot in 2010 cost a Chinese company the equivalent of 5.3 years of salary and benefits of a worker, next year it will cost only 6 months Of salary.

And that robot works three shifts in a row and does not go on vacation. The increase in intelligence is due to the Cloud. Until a few years ago, each robot was programmed to screw a nut into a car factory. Today, robots are connected and have the ability to learn and perfect themselves.

These advances could frustrate many people ...

This happens constantly. I see it in my profession. I used to send my columns of the 'Miami Herald'. Today, translations are done by an algorithm. It used to send transcripts, but in the last six months, services have appeared that do it automatically. Another example: a dermatologist spends a good part of his time looking at sun spots and telling us if they are potentially bad. Now there is an application that, from a photo, tells you the same thing.

Only then you go to the dermatologist, so your work is reduced by 50 percent. It does not mean you should give up your dream, but if you do not care about specializing in dermatology or another area of ​​medicine with less participation of robots, I would advise you last.

What should colleges and universities teach?

In the age of Google, it does not make sense for schools to teach in what year America was discovered. The main thing is to focus on soft skills: creativity, teamwork, flexibility. Because the things you learn today at school and at university are obsolete when you graduate. Second, we're all going to have to study for life.

As Rafael Reif, president of the Massachusetts Institute of Technology (MIT) told me , the university will cease to be a space where you go four or five years in your youth to acquire knowledge that you will apply from then on. It will become a space to which you always return to update yourself.

Is there a future of unemployment and shortages?

In the medium and long term, I am optimistic. For millennia, technology produces more jobs than it eliminates. But I 'm more fearful about the short term, because times have accelerated. Thousands of years ago, people had centuries to reinvent themselves, to move from living as hunters to living as farmers.More recently, in the 19th century, those who turned on gas lamps in the streets had 50 or 70 years to teach their children another trade, when those were replaced by electric lamps.

But today, the changes occur in 24 hours. A lady who charges tickets in a parking lot is warned overnight that she will be replaced by an automatic turret that allows paying by credit card. In addition, initially, this phenomenon will accentuate inequity, because reinventing yourself as a data analyst will be much easier for a professional than for a taxi driver who has been replaced by a car that drives alone.

How to maintain optimism then?

In the long term, technology will lower production costs, which will lower the cost of living.So the fact that we work less and less is not necessarily bad. It is the same progressive decrease in effort that has been seen in history. In Biblical times a day of rest began to be taken on Saturday. Then came Sunday. Now, in several countries in Europe they have 32-hour work weeks.

This is going to generate a great change, because today we define ourselves by our work, it is what gives us a purpose, but that is something that comes from the Industrial Revolution. In the Middle Ages the opposite happened: those who had the highest status, the aristocrats, did not work. They dedicated themselves to poetry, to playing the harp, to listening to opera. The work was for the lowest scale of the social pyramid.


In Latin America will we have more time to prepare?

Unlike. The wave of automation will hit us first and strongest in emerging countries, as the World Bank points out . The first jobs to be replaced are the mechanics, from the manufacturing factories, and most of these are in China, Mexico and many of our countries.

Last week I was in Argentina and I interviewed the president, Mauricio Macri. He told me that he was recently announced an investment in a $ 200 million brewery. He was happy until he asked how many jobs he was going to create: 22. "That's the number of positions that a post of empanadas produces," he told me.

Will there be a social conflict because of this phenomenon?

We are already seeing evidence of this. Recently, restaurant and hotel workers in Las Vegas threatened to go on strike, among other things because of the increasing use of robots in their jobs. They already have robots that take breakfast to your room; also, a robot 'bartender', and, according to the Las Vegas casinos, he makes better cocktails than a human when calculating measurements and density with greater precision.

I interviewed the union leader and she told me thatthey do not demand that they stop using robots, but that the owners of the hotels pay them the training in another hotel trade to the workers who are unemployed because of the robots. The union knows that it does not make sense to demand that hotels do not use robots. It's as if the union of postmen threatens to go on strike if we do not stop using the 'e-mail'.

Is there any technology that should not exist?

Technology must be evaluated based on what it contributes. We do not have to blindly accept everything new. We have just seen the infiltration of fake news on Facebook and Twitter to influence the US elections. UU However, you are not going to stop the networks.

What you can do is to demand from their owners that they are not irresponsible and do not allow sites that promote racism or hatred, or that spread false news. The technology is unstoppable, but adaptable.

Will hackers be the criminals of the future?

One of the work areas of the future is the digital police. It will be required on the network to the same extent as is needed today in public places. There will also be a large field for social service tasks, such as caring for the elderly in a society that will live longer and longer . In the long term, I support a universal basic income for those who are displaced from their jobs by automation.

The whole field of robot programming and repair will increase, since by 2025 its population will have gone from 253,000 to 1.3 million.

And likewise there will be more and more space for artists, athletes and creators of entertainment, for the increase of free time. At the end of the day, technology will create more jobs than it eliminates. But in the short term it will be a sálvese who can.
- September 04, 2018