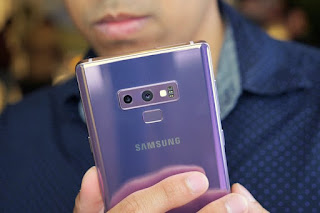 It did not take long before the new Note 9 ended up under the magnifying glass of the various benchmark programs . In fact, Tom's guide tested the Snapdragon 845 version of the 6 GB Galaxy Note 9, using Geekbench 4 and 3DMark Slingshot Extreme 3.1.

Without further ado, here are the results of the various smartphones being compared, including the iPhone X :

As the name suggests, Geekbench 4 verifies the performance of all-core load processors. The Notes 9 got a much lower ranking than the much famed iPhone X . about 8,876 points. Arriving third, behind OnePlus 6, a device with a decidedly lower cost, however, confirms an improvement over its predecessor. Reports show that we are talking about a rather significant performance ratio: over 35%. Instead, Google's flagship phone totaled only 6,282 points.

The test results are however positive
This test tries to squeeze most of the graphics chips of the devices. But even if the path of Note 9 continues to reach high summits, it is still evident a performance gap against rival iPhone X. It should be noted that the OnePlus 6 used was the 8 GB RAM version , giving it an advantage in that test . It seems above all that the Note 9 shares more than a simple visual similarity with the Galaxy S9 +, which has an almost identical result in the scores.

Let's not forget that while OnePlus 6, Note 9 and Galaxy S9 + were released this year, the iPhone X is a 2017 model , with a new one coming in just a couple of months.

Obviously, stress tests do not translate perfectly into everyday use, but still give a good idea of ​​the capabilities of different devices under similar conditions.