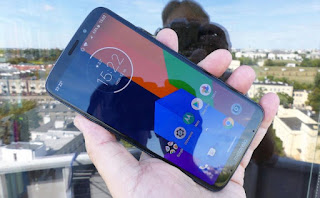 Moto Z3 Play is a very nice smartphone with an idea that Motorola had to adapt to new market rules.
First. This idea is modules. It is not new, because Motorola has been promoting it since 2016. What is it about? For example, we can attach a camera module (with a 10x optical zoom), a loudspeaker, an additional battery, a module that converts the phone into a portable game console, or even a module that immediately takes a picture of us. Thanks to this, our smartphone either gains a new function or, to a very advanced degree, develops the one already possessed, and we have one device for everything.

Secondly. New market rules are the proportions of the screen. When Motorola introduced the first modular smartphone to the market, the standard was 16: 9. Today is 18: 9. Others are not being done anymore. And Motorola promised her that for the next three years, the next versions of the phones will be compatible with the modules. You bought Moto Z Play, you bought a few modules and you have the guarantee that the next versions of this phone will also work with them. This is a very honest approach, which, however, turned out to be for the companychallenge. Because the new aspect ratio is another smartphone design. And the modules are still the same ... Motorola could of course say, sorry - we promised something, but the conditions have changed, today no one will buy an archaic-looking device, you must forgive us, but the modules will not match the next generation Moto Z Play. Or grit and do something for the wolf to be full and the sheep. She chose the second option, that is she behaved super honestly to the customers, only that in the design of the phone had to go for some compromises, which, to be honest, sometimes hurt a little.

First, the fingerprint reader changed its location and moved from the screen to the right side. And I like it, I've always been an enthusiast of such a situation, for years the Japanese from Sony have done so. It's just that there was a button that could also be used to extinguish the screen. Here, this is just a tile used to wake it up, and the on and off button is placed on the opposite side. And this is unfortunately an uncomfortable solution, especially since the screen can only be extinguished in this way (there is no double hit or any widget). It is a pity that it was not decided to put this button on the right side, in the area available for the thumb. Like a trifle, and until the end of the tests it hurt me like a thorn in a shoe.
- August 19, 2018