Insane - a review of the movie filmed using the iPhone! 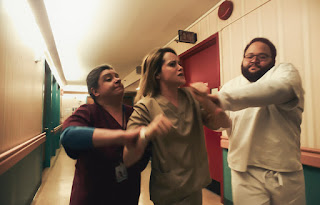 Steven Soderbergh can not get away from directing, which he declared a few years ago. New technologies and the ease with which the film can be made today made the creator of Ocean's 11 broke his promise. Insane is a genre cinema, made casually, with a small budget and using a smartphone. Although this is not a masterpiece, fans of crazy thrillers will not pass by this title indifferently.

Sawyer Valentini (Claire Foy from The Crown ) tries to live a normal life after she was forced to leave her hometown to free herself from the man who persecuted her (Joshua Leonard). She has a new job, a new circle of friends, but it still seems to her that the tormentor is stomping on her heels. She goes to a medical clinic to sign up for therapy, but she is closed against her will, because she poses a threat to her and others' lives. Initially only for 24 hours, but through the outbursts of anger he is there to spend at least seven days. As another patient explains, Nate (Jay Pharoah), private medical centers are holding patients in this way to extort money from medical insurance. Only if Sawyer is really healthy, now that she thinks she is a stalker he followed her to the hospital?

Unsuspicious Action can go in two directions: either the creators build a continuous doubt in the heroine's mental health, or decide to present the real version of events. Due to the spoilers, I will not reveal which option Soderbergh chose, but it does it quite consistently. Some viewers may not like this choice. The film has good dynamics, good acting (Juno Temple has probably the most interesting role) and the current envelope, criticizing the American health system based on private companies. Soderbergh also touches on the theme of stalkingwomen by men, a sociological phenomenon even more present in the era of social media and easy access to technology. All the more the use of the iPhone as a camera in the film strengthens this message, while being an ironic commentary.

Let's face it - Insanity is not a complicated social drama, but a class-oriented cinema. From the point of formal view, the choice of medium turned out to be a bull's-eye because the phone camera uses rather strange viewing angles (close-ups, frog perspective) and gives anxiety image, which with a fairly "grained" texture increases the impression of the roughness of the changed world. The nosy lens sometimes "sits" on the heroine's face, it is again attached to the back of her head. The assembly and saturated with bronze, and the blue colors only confirm that we are somewhere on the verge of health and madness. The creators' assumption was to capture the feeling of paranoia and they managed quite well.
- August 19, 2018