In the fireball to the attic

In the fireball to the attic 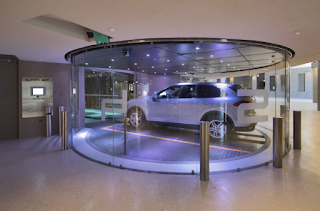 The Porsche Tower rises on the rubble of the financial collapse of 2008. Gil Dezer, its promoter, remembers the apocalypse lying on a sofa in the lobby. "I had diabetes, I started losing hair. The world was falling apart. Banks falling on all sides, bankers jumping through the windows. And I built four Trump- licensed towers in Miami and the Porsche project.

" Dezer, a 43-year-old New Yorker who speaks Spanish with a Buenos Aires accent - his ex-wife's inheritance - smiles thinking that he was able to escape unscathed from that massive infarct of capitalism. In Miami, one of the world capitals of ostentation, the Porsche Tower is, since it was inaugurated, one year ago, one of its wealth icons.

The first real estate development with the name of the legendary German car house is a black cylinder almost 200 meters high next to Miami Beach. On the outside it imposes, but its most spectacular secret is inside. There are three elevators in which residents can go up to the door of their apartments sitting inside the vehicle.

"It's a building designed for the crazy cars," says Dezer. The tower cost more than 400 million dollars and the elevator, in which worked thirty engineers from the United States and Germany, 40 million, including six that were spent in assembling in Chicago a small replica tower to make tests by demand of the Miami fire service, which had never given such an exotic license.


Dezer acts as a master of ceremonies to teach how an innovation works that "will mark the way to park cars in tall buildings in the future," he says. The driver does not have to do anything.

Turn off the engine and a robotic platform is responsible for placing the car in its exact place. The process of accommodation takes a couple of minutes, but as soon as it starts, the climb is fast. The ears are plugged. Dezer, exultant, asks: "Is it cool or not?"

Who are the tenants? The constructor only gives clues. "Great executives, celebrities, some singer that you listen to all the time on the radio. There's a guy who is president of a drink you drink often, a video-shop mogul or an individual who had a Nike factory in Argentina, sold it to the company and retired. "

Upon reaching the penthouse - still for sale for 32 million dollars "negotiable" - the elevator stops in a room with direct entrance to the living room, a huge space with a window from floor to ceiling overlooking the turquoise sea of ​​Miami. "From the street straight to your house," sums up Dezer. "This is the idea. You can live like a hermit inside your sports car. "

The Porsche Tower combines the two attributes of the family. Gil's father, Michael Dezer, made his fortune in the Manhattan real estate market and has a collection of more than a thousand cars, including "all the batmovils, the DeLorean of Return to the future and one of James Bond", specifies his son, who has at the same time 30 sports. At the foot of the tower, he shows the Porsche that arrived yesterday from Germany, a copy of 372,000 dollars and 700 horses, to fulfill one of his greatest pleasures: "Accelerate it and feel how your eyes get embedded in your brain".