Èrica, the driverless minibus that will travel through Catalonia

Èrica, the driverless minibus that will travel through Catalonia 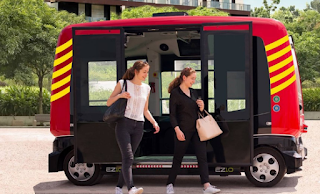 
Catalonia joins the tests of collective vehicles without a driver, such as those being carried out in countries such as France, Switzerland, Germany, the Netherlands, the United States, Australia or China. Eight Catalan municipalities will see an autonomous minibus circulate from September. It will be a pilot test of four days in each city: Sant Cugat, Terrassa, Sabadell, Girona, El Vendrell, Reus, Martorell and Vic.


A tour promoted by the Generalitat and the Association of municipalities for mobility and urban transport (AMTU) and that will be paid by municipalities, the Catalan government and the companies EasyMile (vehicle manufacturer) and Transdev (the operator). The cost of the project is 300,000 euros.

The chosen vehicle is electric, has 12 seats (six seats and six for standing passengers) and has even been baptized. It's called Èrica. "The acronym of electric, revolutionary, intelligent, shared and friendly", explained yesterday the president of the AMTU, Jordi Xena.

The key to its autonomy are the sensors that it carries and that identify any object and the monitoring of the routes through which it circulates, which have been previously mapped exhaustively. This process of cartography is one of the issues that makes the start-up of these vehicles more expensive.

The bus of the Catalan tour will circulate a maximum of 500 meters, at a speed of 18 kilometers per hour (the average of public transport is 13) and without stops (only the start and end) and as has happened in other cities closed circuits or pedestrian streets, without interacting with other vehicles.

It's not that these buses can not interact with other cars. It is not a technical issue, it is a question of legislation, explained the responsible of the AMTU yesterday. In Spain they are not yet approved, so to make the tests have been chosen areas of municipal ownership. And that they had good GPS coverage (because you have to map everything, from a wastebasket to the facades) and access to electric chargers.

Regarding the legislative issue, the regulation in the future will be European, explained the general director of the AMTU, Joan Prat. Although each country will have to approve the vehicles so they can circulate. And in Spain it will be the General Directorate of Traffic (DGT) who does it. "The DGT works on the instruction to certify and standardize vehicles," he explained.

The municipalities rely on these vehicles to cover what is known in mobility slang as the last mile. The distance between public transport and a work or study center.


Autonomous buses would be very useful, for example, to connect industrial parks or university campuses, where there are very clear peak hours, with much demand: and during the rest of the day valley hours in which few people need a regular service, which is very expensive for the administration, because it has to pay drivers.

In Spain, to date, autonomous bus tests have been carried out in the San Sebastián technology park , Talavera de la Reina and in the port of Málaga. In Europe, there are consolidated services that operate as a shuttle in Lyon and cities like Paris have also done pilot tests.


There have also been in Sion (Switzerland), the City of London (Great Britain), Germany or the Netherlands. In this case the autonomous electric bus operates regularly at the Schipol airport. It covers a distance of 20 kilometers at a speed of 70 kilometers per hour.

Other services operate regularly on the campus of the University of Michigan (USA), at Christchurch Airport in New Zealand or in Perth (Australia). In Las Vegas a test was also made, but the bus collided with a truck due to driver error. In Asia, Hong Kong or Singapore are the pioneer cities in collective autonomous vehicles.
- August 30, 2018