A chain of supermarkets tries out the distribution with autonomous cars

A chain of supermarkets tries out the distribution with autonomous cars

Arizona maintains its commitment to driverless vehicles, despite the Uber accident 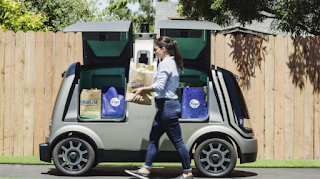 The US supermarket chain Kroger, one of the largest in the United States, has begun to distribute the purchase in autonomous cars developed by Nuro, a technology company that has developed a driverless vehicle for the distribution of goods.

The pilot experience has begun at Fry's Food Stores in Scottsdale, Arizona, the state that has most committed to this technology and where the most serious accident occurred with a self-contained vehicle. Last March in Tempe, a town in the same state, a self-driven Uber car fatally ran over a 49-year-old woman who, walking, crossed the path of the vehicle without the occupant of the car, who supervised the test, reacting to time to avoid it.

Despite the incident , the mayor of Scottsdale, Jim Lane, has renewed his bet for this type of services, according to the information distributed by Kroger: "We welcome a technological innovation that can benefit the neighbors." "Our goal is to save time to people while we work safely and learn how to improve the experience, "added Nuro co-founder Dave Ferguson.The company claims that their cars are the safest, weigh less and run at very low speeds.

The distribution experience at the supermarket started at the end of last week for customers requesting shipping (at a cost of $ 5.95) on the day or the next day. For the time being, Toyota Prius autonomous vehicles are used and it is expected to introduce the R1 model in the autumn.

In this test, two supervisors accompany the vehicle, previously loaded with the orders by the Kroger staff. The customer waits at the delivery address for the arrival of the car and, after the development of the experience, it is foreseen that the supervisors do not have to travel and the user accesses their packages by means of a personal code.

Also in Arizona, Waymo, the driverless car company of the Aphabet Inc. conglomerate, to which Google also belongs, began testing its driverless taxi in April.

In Spain, eight Catalan municipalities will test a collective transport project with an autonomous mini-bus for four days starting in September .

Baidu announced this year that the bus manufacturer King Long, after having certified satisfactory levels of efficiency and safety, will begin to generalize the production of this type of cars.